This article describes how to get and use the Distribution Package of the STM32MPU Embedded Software for any development platform of the STM32MP1 family (STM32MP15 boards and STM32MP13 boards), in order to modify or add pieces of software, and to create the right Linux distribution, for the targeted product.

It lists some prerequisites in terms of knowledges and development environment, and gives the step-by-step approach to download and install the STM32MPU Embedded Software packages for this Package.

Finally, it proposes some guidelines to upgrade (add, remove, configure, improve...) any piece of software.

If you are not yet familiar with the STM32MPU Embedded Software distribution and its Packages, please read the following articles:

If you are already familiar with the Distribution Package for the STM32MPU Embedded Software distribution, the fast links to essential commands might interest you.

To sum up, this Distribution Package provides: 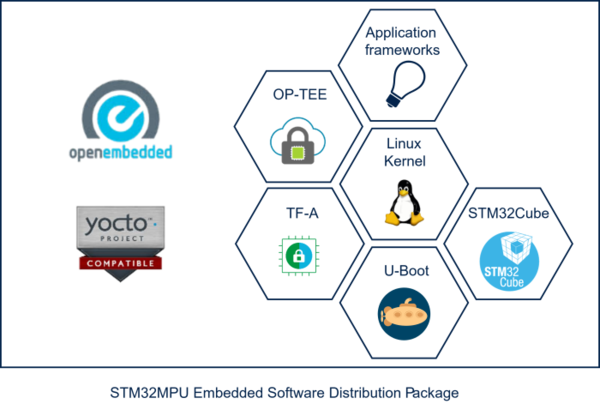 Components of the Distribution Package

The steps to get the STM32MPU Embedded Software packages ready for your developments, are:
☐ Checking the prerequisites
☐ Installing the Starter Package for your board

Once these steps are achieved, you are able to:

The STM32MP1 Distribution Package aims at creating a Linux distribution for the targeted product: solid knowledges about Linux are recommended to make the most of this Package.

Having a look at the STM32MPU Embedded Software architecture overview is also highly recommended.

The recommended setup for the development PC (host) is specified in the following article: PC prerequisites.

Whatever the development platform (board) and development PC (host) used, the range of possible development setups is illustrated by the picture below.

The following components are mandatory:

The following components are optional, but recommended:

Additional optional components can be added by means of the connectivity capabilities of the board: cameras, displays, JTAG, sensors, actuators, and much more.

Before installing and using the Distribution Package, it is essential to get familiar with your board thanks to its Starter Package. All articles relative to Starter Packages are found in Category:Starter Package: find the one that corresponds to your board, and follow the installation instructions (if not yet done), before going further.

In brief, it means that:

Thanks to the Starter Package, all Flash partitions are populated.

Then, with the Distribution Package, it is possible to modify or to upgrade any of these partitions independently one from the others.

The OpenEmbedded environment setup script must be run once in each new working terminal in which you use the BitBake or devtool tools (see later):

The BSP for STM32MP1 depends on packages and firmwares which are covered by a software license agreement (SLA). You will be asked to read and to accept this EULA.

Among other things, the environment setup script creates the build directory named build-<distro>-<machine> directory. After the script runs, the current working directory is set to this build directory. Later, when the build completes, it contains all the files created during the build.

BitBake is a core component of the Yocto Project and is used by the OpenEmbedded build system to build images. This build engine executes shell and Python tasks according to provided metadata stored in recipe (.bb), configuration (.conf), and class (.bbclass) files. The BitBake cheat sheet article introduces some BitBake command-line options, describes shortly the syntax of the recipes (.bb), and gives links towards standard documentation.

The STM32CubeProgrammer tool is used to flash the STM32MPxx boards with the built image. It's assumed that this tool has been installed through the Starter Package associated with your board.

Depending on the board, several Flash devices (microSD, eMMC...) might be available. The microSD card is considered as the Flash device in the rest of this article.

Once the flashing is terminated, the boot switches must be configured so that the Flash device (e.g. microSD card) on which the image has been flashed, is selected as the boot source:

You can check the build by executing the same basic commands as the ones described in the Starter Package article for your board: Category:Starter Package.

Now that the OpenSTLinux distribution is installed and built, let's customize it thanks to standard OpenEmbedded methods (e.g. creating a layer) and utilities (e.g. devtool).

The How to create a new open embedded layer article proposes different ways to create and manage these custom layer(s).

OpenEmbedded is a build framework used to create Linux distributions for embedded devices, and is originally not a development environment. An OpenEmbedded companion utility named devtool aids in developing, building, and testing code that is going to be integrated into an image built using the OpenEmbedded build system.

The OpenEmbedded - devtool article gives an overview of this tool, and introduces the way to add, modify and integrate new application or library in a distribution.

The following article describes same examples as the ones in "How to cross-compile with the Developer Package" but in the Distribution Package context:

9.3 Integrating developments made with the Developer Package[edit]

To integrate some developments described in previous chapter 9.2 in Yocto build process, we explain here how to:

This chapter is only applicable for STM32MP15x lines

Refer to Distribution Package for STM32CubeMP1 to understand how the STM32Cube MPU package is integrated to the STM32MPU embedded software distribution with Yocto project.

It can be useful if you want to:

11 Creating your own Linux distribution[edit]

First, it is possible to customize your software to fit hardware modification with article: How to create your own machine.

How to create your own distribution is the next step to do if you want to enable some framework (like wayland or x11) and some features (like alsa, nfs, wifi, bluetooth, ipv6, ...).

Then to add some missing userland tools (like libdrm, evtests, iptables, i2c-tools, ...), you can customize some existing images. You have to go to this article: How to create your own image.

12 Generating your own Starter and Developer Packages[edit]

Note that the structure of this sources/arm-ostl-linux-gnueabi directory is obviously similar to the directory structure of the Developer Package for TF-A, OP-TEE OS, Linux kernel, gcnano-driver and U-Boot.

If you are already familiar with the Distribution Package for the STM32MPU Embedded Software distribution, fast links to the essential commands are listed below.

Arm® is a registered trademark of Arm Limited (or its subsidiaries) in the US and/or elsewhere.

debug and test protocol, named from the Joint Test Action Group that developed it

Software development kit (A programming package that enables a programmer to develop applications for a specific platform.)

Firmware image package is a packaging format used by TF-A