Exchanging buffers with the coprocessor

This is the stable version, approved on 26 November 2021.

In the STM32MPU Embedded Software distribution, the RPMsg protocol allows communication between the Arm® Cortex®-A and Cortex®-M cores [1][2].

To implement a feature relying on RPMsg protocol, it is important to understand that this protocol has not been designed to directly transfer high data rate streams. As a result, the implementation needs to be adapted depending on the use case constraints:

It is not possible to provide strict rules for choosing one or the other implementation. This depends on the use case but also on:

The aim of this article is to help choosing the best adapted implementation. If this is not sufficient, another approach is to implement first the direct mode and test its performance in your system.

The RPMsg provides, through the virtio framework, a basic transport layer based on a shared ring buffer:

The size of the buffers is hard-coded (512 bytes). However it is possible to customize the number of buffers used. Modifying this parameter impacts the number of buffers allocated in both direction (refer to resource table for details).
A doorbell signal is associated to each RPMsg transfer. It is sent to the destination processor via the stm32 IPCC mailbox and generates an IRQ for each message transfer.
Notice that the IRQ frequency can be a criteria for the decision. For instance a 1 Mbyte/s transfer from Cortex-M4 to Cortex-A7 generates around 2000 IRQ per second on each Cortex, to transfer 512-bytes RPMsg buffers.

This mode consists in using the RPMsg buffer to transfer data between the processors. 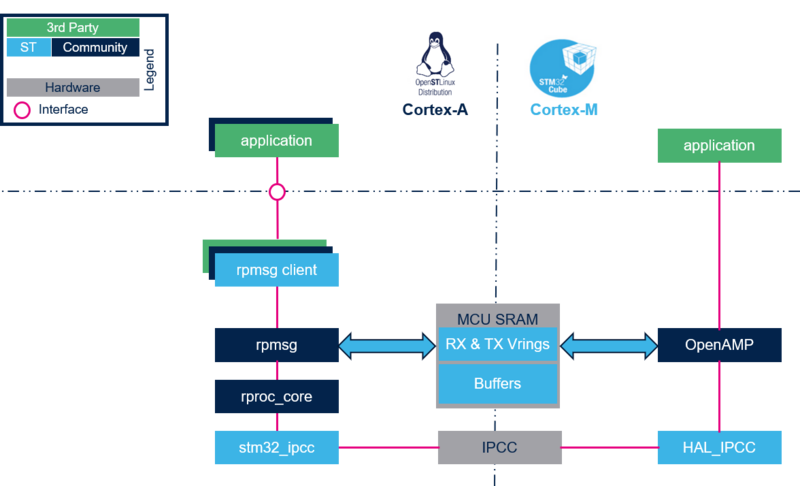 For application sample, refer to:

This mode is also called "large data buffers exchange" or "Big Data". It consists in using RPMsg to carry references to some other buffers that contain the effective data. These other buffers can be:

This implementation allows limiting data copy between producer and consumer, offering direct data access to buffer clients such as applications. 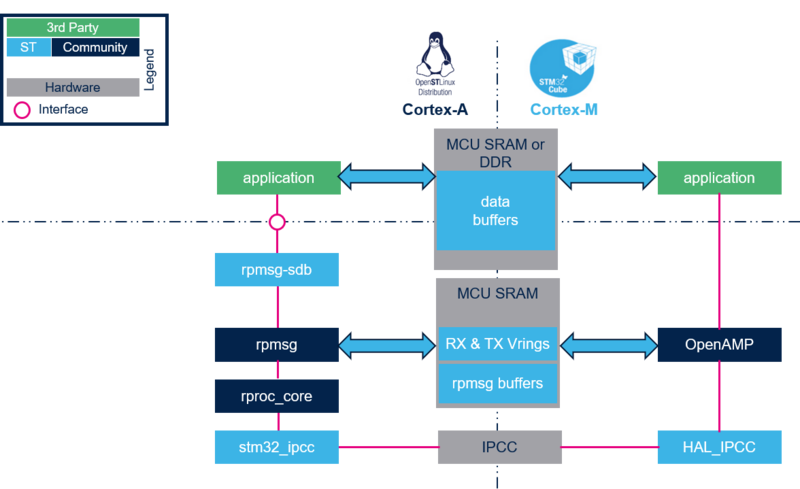 In the above overview, rpmsg_sdb is a driver taken as an example. It offers to the application an interface to allocate and exchange buffers with the remote processor.

This implementation is recommended:

For application sample (and source code), refer to the How to exchange data buffers with the coprocessor article.

Arm® is a registered trademark of Arm Limited (or its subsidiaries) in the US and/or elsewhere.

Microcontroller unit (MCUs have internal flash memory and are intended to operate with a minimum amount of external support ICs. They commonly are a self-contained, system-on-chip (SoC) designs.)